Buddha smiling at the hindi woman.

Travelling and painting on location in Syria, Java,and Malaysia 2009/2010, was a great opportunity for me to paint the everydaylife from two very different Muslim countrys. To create such a comprehensive solo exhibition to the incredibly endearing and beautiful historic Ruin Hall, the heart of Koldinghus Castle, has been a great honor and great pleasure for me. It kept me up when inspiration failed me. Dorte Gjerlov. Damaskus . Syria 2009.

In the autumn of 2009 the Artist Dorte Gjerlov took off on an adventurous journey to paint pictures of everyday life in two very different Muslim countries, Syria and Java. In her paintings Dorte Gjerløv shows us aspects of life in the Muslim world that we can otherwise seldom gain insight into. Dorte Gjerløv’s paintings from a backpacking journey to Syria and Java, was partly finanst with a smaller amount from The Danish Institute in Damascus. Openingspeach by Naser Khader, member of the Danish Goverment, Folketinget. Curator Axel Johnsen. Kolding Hus, Royal Castle, Ruin and Museum. Denmark. 2010 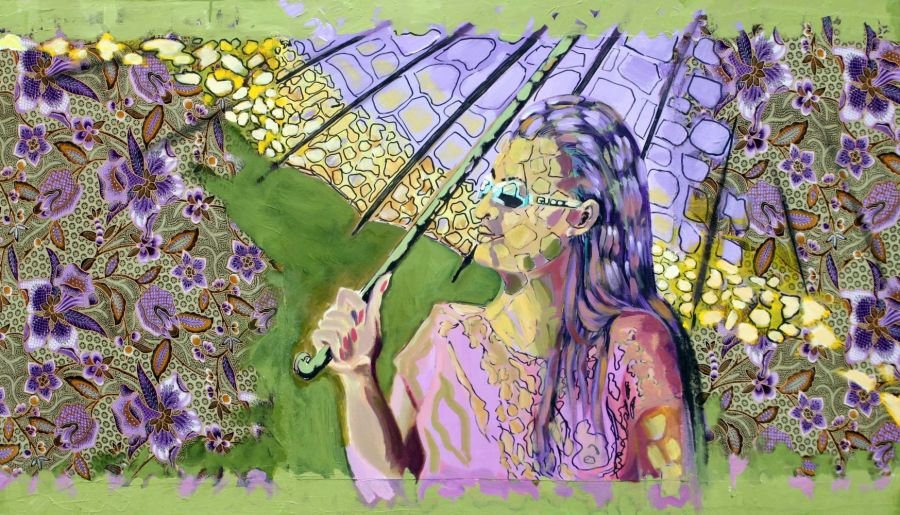 Artist Dorte Gjerlov exhibiting works from a backpack trip in Syria and Java - two very different Muslim worlds that deserve to get positive attention in an era of too much focus on war, terrorism and extremism, she believes

A shepherd sitting in a side street in Damascus and watching his flock of sheep - with a sky of satellite dishes hanging on the facade above him.
Young people with open-necked shirts and fluttering feather boas dancing at a club while a sunglass clad girl elsewhere smiles when flying soap bubbles passes by.

Artist Dorte Gjerlov shows in her current exhibition at the Museum of Koldinghus colorful everyday motifs from one to many Danes unknown part of the Muslim world.
And she admits that there is a deliberate agenda behind it.
"I want to show that there are so incredibly much, the Muslim world can dish out.
It's not just about bombing men and burkas, "she says.

Dorte Gjerlov was in 1992 as 32-year-old graduated from the Aarhus Art Academy, she always had the urge to travel and has so far visited 60 countries.
She reached her first Muslim country, Turkey, in 1980's, but after the winter of 2005-2006 grew the idea to explore Muslim countries really in - to deliberately choose
the positive flashes, and disseminate it to the Danes through art.

"I do not plan far into the future, but the cartoon crisis has certainly played into my decision to make what I call a 'tenderly counterpart? towards the pictures and stories we get from the Muslim countries, "says Dorte Gjerlov.

The choice of travel destinations fell on Syria and Java, one of the largest islands in Indonesia, but the month-long trip in the winter of 2009-2010 was also around Dubai and Malaysia,
which are represented by individual paintings. In this way, Dorte Gjerløv show two ways to live by and integrate Islam, the Middle East and Asia.
From the Syrian desert, there are paintings with beehiewe houses, mud huts,that  with their satellite dishes in the middle of nowhere looks like scenes from "Star Wars" films.
Indonesian capital, Jakarta, impress rather as a high-tech metropolis with skyscrapers and flickering neon signs.

"I have tried to show that someone actually want the multicultural community," she says and tells of a street in Malaysia, called Harmony Street.
Here you'll find both a Hindu temple, a Buddhist temple, a mosque and a church.

"Some Danes see themselves as citizens of a multiethnic and multicultural society, but we are not even close, and we should also not be so afraid to get it, "she says.

The vast majority of Dorte Gjerlovs paintings have become the basis of specific episodes, places and people.
Painters Gear constituted half the weights in Dorte Gjerlovs suitcase, and on each a small hotel on the trip were black plastic bags scattered across the floor and stuck to the walls,
as makeshift studios arose. Most of the artworks in the exhibition are the result of sketches loosely drawn up on the block or captured with digital camera on the spot
then in a hotel room to be almost definitive works on canvas and paper brought.
For Dorte Gjerlov it would not work to jump on a plane, collect sketches a few days and then paint back home in Aarhus.
"I must be in the country to feel the atmosphere.
In Aleppo in northern Syria, I could always hear a sock seller peddle his products, a popular DVD that ran in a ring opposite the street, and the many mosques that called to prayer. The sounds inspired in the process, the ones I need, "she explains.

This meant, however, that papers and canvases could only be in certain objectives fit into the airlines' rules for luggage
but several of Dorte Gjerlovs works were intended as and is now several feet long and high. The works were split into chunks and later assembled with paint on masonite.
"I see the fragments as a mosaic of peoples and cultures from the trip, so it became part of the technique," says Dorte Gjerlov about the process.
In several of the paintings are also part of different materials. Dorte Gjerløv use plastic to restore the glistening surface of the wet plants in Java's rain forests,
while colorful fabrics from Syria is helping to create women's clothing. Home brought meters of the textiles was also presentet on a divan at the vernissage of the exhibition,
visitors continued to believe that Dorte Gjerlov herself was behind the ornate pieces of cloth.
"They simply could not believe that someone in a Muslim country could create this kind," she says.
The attitude towards the Muslim world are experiencing Dorte Gjerlov as devastating for Denmark's reputation and the opportunity to share what we can contribute with.
"If we continue to be stubborn and grumpy people, we risk that people eventually will not bother us anymore," she says and explains that she is in connection with the exhibition,
hasbeen met with criticism that she has been concerned only with the positive from the Muslim world.
But it has been intentional as the ugly, according Dorte Gjerlov is amply made otherwise.
"Some see it as naive, but here I'm icy face.
I wanted to see what happened when you reached out, instead of always kicking out at the Muslim world, "she says.

Curator Axel Johnsen, opened the exhibition with a welcome speech to the audience. He explained, among other things why Koldinghus Castle had chosen to display the exhibition, New Impressions from the Orient

The second speech was given by Artist and creator of the exhibition, Dorte Gjerlov. She spoke positively about the countries she had stayed in during the whole process, and how her impressions had been the basis for creating an artistic mosaic of people, nature and situations.

The third and officiel speach was held by Politician Naser Khader. He talked about his life from childhood, teen years and up to where he is today, with the many problems and sometimes comical situations that can arise when you're a newcomer and a Muslim family in Denmark. Also he spoke about art and its significance.

Before all the speaches, the audience had been able to experience and enjoy The Fhilharmonic Chorus from Aalborg. The choir sang in the Castle Courtyard, and the whole event was provided by beautiful summer sunshine.